ADHD is a neurobiologically-based developmental disorder characterized by distraction, impulsivity, and sometimes hyperactivity. As teens go through the changes brought on by puberty, symptoms of ADHD in teens have been known to worsen. Because ADHD in teens often causes lack of focus in the classroom, they tend to struggle academically.

The cause of ADHD is not fully understood. However, scientists have found that genetics is a strong indicator, and nutrition and environment may be related to triggering ADHD in young children. Early detection and treatment of ADHD in teens  is critical in order to ensure future success for teens.

Treatments for ADHD in teens aim to reduce symptoms in order to improve daily functioning. Behavioral therapy is utilized to change behaviors associated with ADHD. ADHD in teens often shows up as impulsivity, distractedness and poor anger and frustration management;  these can often be controlled through structural changes to their everyday lives as well as tools they can learn to manage themselves.

Talisman Programs and ADHD in teens 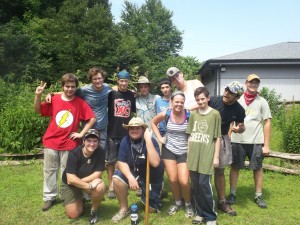 Talisman Programs serve many teens with ADHD through our summer camp programs for children and teens ages 6-22. Talisman provides a traditional camp setting in which our special needs campers have the opportunity to participate in a summer camp that is designed to fit their needs.

Talisman addresses ADHD in teens, as well as autism in children, teens, and young adults. With a caring staff and a program specifically designed  to be developmentally-appropriate for all of our campers, they feel comfortable, safe, and accepted.

To suit the needs of teens with ADHD, daily tasks and problem-solving are taken step-by-step, allowing teens to think about their decisions rather than taking action impulsively. Activities are based around high interest and physicality in order to increase attention and minimize distractions.

In a 2014 study of 2,500 teens, aged 12 to 15, researchers found that ADHD in teens causes teens to be three times more likely to use tobacco or alcohol, no matter their age, race/ethnicity, sex, income or having a household member who smoked.

A 2002 study found that the rate of ADHD in teens and children increased significantly in the span of eight years. This means something has occurred in the environment which  is causing teens and children to be diagnosed with ADHD at a higher and higher rate.

An article in the Huffington Post was written by Grace Friedman, a teenager discussing ADHD in teens. Friedman was diagnosed with ADHD and describes the experience of having the disorder as “wearing a hazmat suit with a heavy backpack in a race with other teens wearing lightweight clothes”.

Friedman wrote a free guide for ADHD in teens about her experience and how to face the challenges ADHD poses.

ADHD in teens defined by…

Is Attention Deficit Hyperactivity Disorder Increasing Among Girls in the US?

ADHD May Raise of Odds of Teens Smoking, Drinking